Small tip: don’t tell someone you’re jealous of them. That is, unless you don’t like them and want them to feel really awkward. It’s pretty high on the awkward meter of things to respond to. Think about it – what are you supposed to say to someone when they say, “I’m jealous of your [insert jealousy-inducing characteristic/object/activity here]”? This topic has been on my mind recently because a few people have said they were jealous of me recently for a few things I do or have done, particularly that I make time to go for a short walk in the afternoon and that I recently passed a big licensing test. So, what do I think you should do if someone says they are jealous of you? And, what should you do if you want to say you are jealous of someone else?

Being Told That Someone Is Jealous Of You

If someone else says they’re jealous of you, that’s their deal and not yours. I felt guilty for years every time someone said they were jealous of me because I didn’t think I was worthy of jealousy (regardless of how true it was). It was a combination of low self-esteem and generally receiving the world’s message that I wasn’t good enough. I would also feel a little angry and annoyed that someone else would say they were jealous because it wasn’t my problem if they were jealous. Whatever I had or did would absolutely be within their reach…if they would just go for it. Nowadays, I try to have some compassion and remind myself that the person is probably not trying to be mean or even intentional about it (it’s amazing how little we think about the words coming from our mouths). I also try to remind myself that the other person might mean it as a compliment.

In short, I have struggled to find a good response to “I am so jealous!” Some responses I have tried:

Being Jealous of Someone Else

If you’re truly jealous of someone, it means that you’re sad for yourself and want what they have (which you probably already know). The thing is, you could have what they have if you really wanted it. However, you haven’t prioritized your life to have what they have, whether it’s going on vacation somewhere or taking 15 minutes every afternoon to get fresh air. This is not the other person’s problem and you have no business putting your issues on them. So, don’t tell them you’re jealous. Or, if you do hear yourself say, “I’m so jealous!”, say something after that. For example, you could say, “I’m a little jealous, but you definitely earned it!” (true text message I sent to a friend recently): 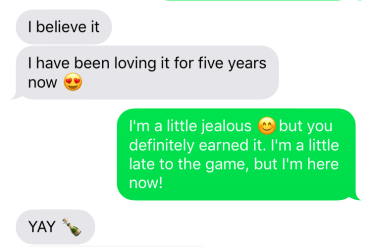 As you can tell, I did say I was jealous, but I didn’t end there. I told her that she had earned whatever it was that I was jealous of and that shifted the focus back to my friend. The point was not to make the conversation about me. If you’re tempted to tell someone that you’re jealous of them, you can say, “I’m really happy for you that you [insert jealous item here]!” There are some variations on this (see text message above), but this is a good starting point. It’s also good because it tells the other person that you care about them and it reduces the awkward meter. A more advanced step is to remove yourself entirely from the sentence and say something like, “It’s really great that you [insert jealous item here]!” This phrasing makes the sentence and sentiment all about the person to whom you’re talking. It’s important to turn the focus on them because that’s what people care about and, if you care about them, then you care about what they care about. Bonus, people will remember that you cared about their feelings and didn’t make a conversation all about you!

If you really are jealous, there are a few things to keep in mind. In the moment, try not to say that you’re jealous. Instead, use what I wrote directly above this paragraph. Then, it’s time to work on you. First off, acknowledge that you made choices. In my case, I chose to continue my education and get a master’s degree while my friend did not. As a result, she had been enjoying more free time than I had. Yes, I was a little jealous but that all my doing. If you’re jealous that someone went on an awesome vacation, acknowledge that you could have too…if you’d chosen to take the vacation time off work and spend the money. However, you chose to stay home, whether it was because you didn’t have the money, you didn’t have the vacation time, you needed to watch your kids…whatever the reason, you chose to stay home. If you really and truly wanted to take a vacation, you could. If you are jealous that someone is a better cook than you are, acknowledge that you probably haven’t put the time into learning how to cook and/or that you didn’t have the same teachers they did. If you really want to learn how to cook, then set your mind to it and figure out how to cook!

Second, either decide to change your life and stay the same. Like I’ve already said, if you’re jealous of someone’s vacation, either decide that you should take your own or pipe down and stop being jealous. If you’re jealous that someone has a cleaner house than you, either decide to clean your house or stop complaining. If you’re jealous that someone is more skilled than you are at something, either learn the skill or acknowledge that you are making the choice not to learn something. And probably most importantly, be grateful for the choices you have made. Sure, it would have been more fun to party than go to grad school, but I’m grateful I went to grad school. It would be more fun to go on vacation, but I’m grateful that I saved the money and accrued more vacation time in case of an emergency. It might be more pleasant to have a cleaner house, but I’m grateful for the time I spent putting together a puzzle instead of cleaning. Life might be more delicious if I learned how to cook, but I’m grateful that my husband can cook and I’m grateful that I’m learning.

Remembering to say ‘thank you’ or not to say you’re jealous is a skill that takes practice. As you can tell, I’ve tried a variety of ways to respond to jealous comments…which shows that it’s a skill I’m working on. I’m also working on not telling people I’m jealous of them and that’s an even harder skill because I get caught up in the moment. Texting is definitely easier because I can see and edit the response before I hit ‘send’, but it still takes awareness.

Bottom line 1: If someone tells you that they’re jealous of you, keep your response short and sweet with, “Thank you!”.

Bottom line 2: Don’t tell someone you’re jealous of them. Instead, tell them that you’re happy for them or that it’s great they get something. Then, acknowledge the choices you made that got you where you are now.